This one is a little late, it’s been hectic over here lately with the move, work (naturally one of the busier weeks at work would coincide with a trip and my move), training for BK Half and then catching a cold. Clearly I’ve worn myself a little thin this week.Race week was busier than usual. Prepping for the move, no taper and having a little more work stuff on my plate meant not a ton of rest ahead of time.

I have trouble just going into a race for fun but given the odd distance of this race I was able to just say, I’ll run hard and see what happens. Friday we left for DC after doing a final walk through of the apartment, finishing up packing and heading into the city to catch our bus. 5.5 hours later we arrived in DC, hopped on the train and checked into our hotel. 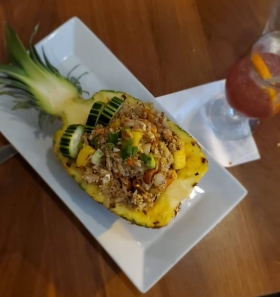 By this point it was dinner time so we found a super nice place by our hotel and gave it try.

Normally not a take pics of your food person, I’d rather just eat it, but this was in a PINEAPPLE. So I had to.

After dinner we walked to the mall and walked around the monuments, mainly in search of a charged scooter for me to play with. We never found one so we ended up walking the 2+ miles back to our hotel. It was a planned rest day, but we ended up walking over 13 miles throughout the day…not exactly rest.

Saturday morning we woke up – relaxed a little bit then headed out for a shakeout run through Georgetown. This was one of the most beautiful running days of the year, the day anyone who survived a Northeast winter desperately deserved.

It was hard to keep it to just 4 and some change, especially once we found the coolest hidden (paved) trail. But I also wanted a cupcake since we hadn’t eaten yet. I ended my run at Baked & Wired and Joe ran back to the hotel. I grabbed us a couple of cupcakes, popped into the Nike store and then walked back to our hotel.

We showered and headed out to the expo, this also included a lot more walking than it should have given it was the day before the race. The expo was great – tons of cute cherry blossom gear and good vendors. I bought some cute Zensah socks and almost got a flower headband (still wish I had!).

It was a bit crowded and the actual packet pickup part was a bit out of the way, but not really a big deal. We picked up our bibs and I realized that I, once again discounted myself way too much and was in a much further back corral than I should have been. I was slightly panicked about this knowing how crowded the race was going to be, I really didn’t want to waste energy that I could be using to run on dodging people.

After the expo, we walked (ugh, why!) to go see the cherry blossoms before dinner. I live in New York so I should be used to crowds and lots of people, but there were more people here than I’ve ever seen in Times Square and possibly more people than actual blossoms. It was quite a spectacle.

We were going to walk around a bit, but with the crowds we decided it’d be too stressful and not very fun so we headed back towards the hotel but with the crowds we didn’t have time to stop by the hotel and just headed to dinner. Dinner was a welcome de-stressor (despite the Saturday night Georgetown crowds), we had ravioli and tons of bread. We ubered to Trader Joe’s afterwards and stocked up with snacks, coffee and pre-race breakfast.

Race morning I was up just before my alarm, as per usual. I immediately cracked open the coffees and started getting ready. Somehow I spend more time on my hair and makeup race morning than any other normal day (to be fair, I have a boat load of hair and I either double french braid it or straighten it out to attempt to tame it). I decided to deviate from my normal clif bar breakfast and went with a cherry pop tart, it was tasty and made me happy.

About half an hour into getting ready, I figured I needed more coffee so I sent Joe out for lattes to help move things along. This was far far far too much caffeine and a terrible idea. But I’m learning. I haven’t done a ton of races so I’m trying to figure out what works for me, clearly a lot of caffeine does NOT.

I put together the last of my race kit, pinned on my bib and we headed out. I ran to start OG 4%s in hand and oversized t-shirt to stay warm – I’m sure this was quite the sight! It was about 1.5 miles to the start and 2 miles total of warm up including finding the bag check, port-a-potties and then getting to our corral. 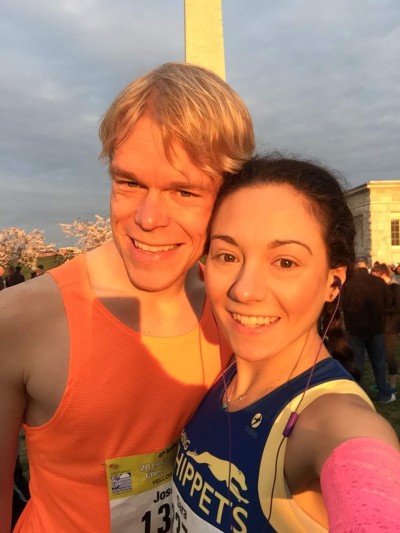 I didn’t see anyone checking bibs so I decided to just hop into Joe’s corral. I was planning to run just under 7:00 anyways. We lined up with the 7:00 pacers and waited. We were quite a bit early but the weather was great so this wasn’t much of a problem. I threw away my shirt too early, but was able to use Joe as a heat sheet (he used me as a pacer until I had to tie my shoe, so we’re even).

I knew I was in a little bit of trouble when I already had to pee right as we started. I figured I could just drink only a couple of sips of water and be fine, not factoring in the 80% humidity and how much I sweat. I settled into my pace from the get go and decided to let go of any notions of surging ahead then praying I could hold on. Today wasn’t the day for that. I turned off my brain and just settled in for the ride, trying to tune out the jitters and stomach cramps from the excess coffee.

At mile 3 I had to stop to tie my shoe. Rookie move, I didn’t triple check these at the start. I jumped back in but had lost Joe. I considered surging ahead to catch him but stomach started screaming at me so I settled back into my pace, surging a little where I could then backing off. I started getting into the groove a bit for the next few miles but never really felt 100% comfortable (welcome to actually racing?). 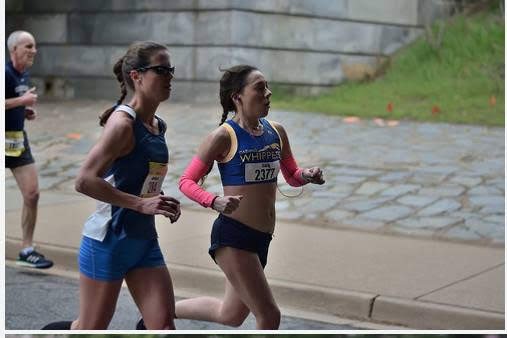 I bargained with myself to hold on until the 10k, then to hold on until the 8 mile mark then I could cruise. At mile 8 we turned into the park where we got the most stunning views of the cherry blossoms, also where my stomach started really screaming at me. I wasn’t opposed to being a like a bear in the woods, but something felt really wrong about doing that to a poor cherry blossom tree. 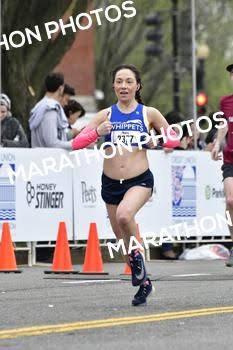 I made it to 9.5, the 800m to go sign is usually my cue to kick but my stomach was absolutely not having it. I’d be lucky to hold on. The last 800m was probably the most uncomfortable 800m I’ve ever run in my life. I was gaining on Joe, but I was unable to kick and catch up to him. At least I narrowed the 30 second lead at the 10k mark down to 14 by the finish. I’ll take it.

At the finish they had cute Cherry Blossom water bottles for us and tons of great snacks that I somehow missed, likely in my mad dash to the port-a-potty following grabbing a bottle of water. Can’t win them all I guess.

Overall, great race with a couple of rookie mistakes and my even an consistent pacing ever. Even more so than Philly. Unfortunately the course was short by 80 meters (so about 16.5 seconds at my average pace) but I highly doubt I wouldn’t have lasted 16 seconds longer at that pace and with all the weaving I ended up doing + missing a few tangents I ended up running a full 10 miles anyways but it does mean I missed that sub-43 10k by ONE second. 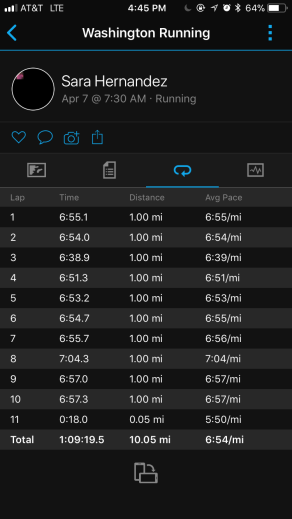 Post race we took a few pics then Joe and I walked/jogged back to the hotel to clean up then head over for brunch. After brunch we all met up to grab cupcakes then get a drink and head back home. 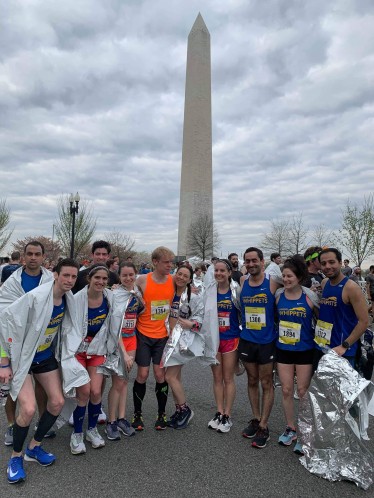 I’d highly recommend this race – it’s especially perfect for anyone tuning up for a later spring half. It’s mostly flat, weather is perfect and the cherry blossoms are beautiful. The views of the cherry blossoms at the back half of the race are so much better than the ones you’d see around the festival area. Signing up is also relatively risk free since you can transfer your bib (you’ll have NO problem finding someone who will want to take it either) or you can drop to the 5k up to the day before. It’s mostly well organized, the start area had plenty of room to warm up, plenty of port-a-potties and even gatorade + bananas and granola bars. The only issue we had was with the bag check. They switched from a tent set up to UPS trucks and it was really disorganized and the lines were horrendous. That said they responded quickly on social media about this issue and I anticipate that they’ll rectify it next year. NYRR had the same problem at the Brooklyn Half last year and for the NYC Half this year the bag check experience was the easiest I’ve ever had (they called out to me before I even got there and had my bag waiting!).

What spring races do you have lined up? Have you ever done a race-vacation?